Flight MH 370 Continues To Shine An Unwelcome Spotlight On BN

The growing criticism of the world media in the light of the Malaysian Government’s inept responses to the shocking disappearance of Malaysian Airlines 370 six days ago has prompted an unwelcome analysis of BN’s political system.

After all, the catastrophe came the very day after the disgraceful conviction of the opposition leader Anwar Ibrahim for ‘sodomy’, thanks to an extraordinary appeal by the prosecution against an earlier acquittal.

Just days before that a similar legal persecution of another opposition voice, Karpal Singh, for ‘sedition’ had also ended in a dubious conviction. Both these convictions, involving long terms of imprisonment, are easily seen by the rest of the world for what they are, which is blatant political persecution by a threatened regime.

Hishammuddin Hussein – like so many prominent figures in the crisis, the western media has noted that the Malaysian Defence Minister’s main qualification for office seems to be his family connections (son of ex- Prime Minister)

Without the impact of Flight MH 370 however, the world searchlight would not have swung so decisively in the direction of Malaysia and there would have been little examination of these and other issues by the wider media and public opinion.

In fact, as the New York Times points out in its own excellent analysis of BN’s political weaknesses (below), Malaysia has got away with posing as a relatively functioning state, thanks to the oil and natural resources, which are largely extracted from the suffering states of Sabah and Sarawak.

Oil money has also funded expensive PR in the west, providing a sanitised image of a regime that practices discrimination, favouritism and corruption at world-beating levels and which poses as a democracy, while practicing shocking levels of vote rigging and bribery at every election.

Price of chickens? Prime Minister Najib Razak (son of an ex-Prime Minister) chose to focus on a domestic PR stunt, despite being centre stage of a major world crisis.

In the latest major assessment the New York Times (below) has summarised the world’s new perception of Malaysia and BN in the light of the Flight MH 370 debacle.

It will take some PR effort to turn this new perception of Malaysia around.

SEPANG, Malaysia — Malaysia’s governing elite has clung to power without interruption since independence from Britain almost six decades ago through a combination of tight control of information, intimidation of the opposition and, until recently, robust economic growth.

But worldwide bafflement at the disappearance of Malaysia Airlines Flight 370 has challenged the country’s paternalistic political culture and exposed its coddled leaders to the withering judgments of critics from around the world.

Civilian and military leaders on Wednesday revealed that they had known for the past four days, but did not publicly disclose, that military radar had picked up signals of what may have been the missing aircraft. It appeared to be flying on a westerly course sharply off its intended flight path to Beijing.

If the radar readings were from the missing plane, it could mean a radical reinterpretation of where it ended up. And it was only under a barrage of intense questioning on Wednesday from a room packed with reporters who had arrived from many countries that officials acknowledged that the last recorded radar plot point showed the jet flying in the direction of the Indian Ocean — and at a cruising altitude, suggesting it could have flown much farther. 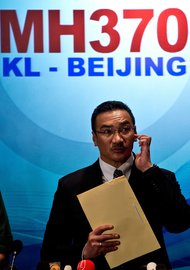 That raised the question of why the information had not been released earlier.

“The world is finally feeling the frustration that we’ve been experiencing for years,” said Lee Ee May, a management consultant and a former aide to a Malaysian opposition politician.

Ms. Lee said she was embarrassed when the country’s defense minister, Hishammuddin Hussein, the scion of a powerful political family, rejected a reporter’s assertion on Wednesday that the search for the airplane had been disordered.

“It’s only confusion if you want it to be seen to be confusion,” Mr. Hishammuddin said at a news conference that unfolded before an international audience.

Relatively free from natural disasters and other calamities, Malaysia has had little experience with handling a crisis on this scale. It is also an ethnically polarized society where talent often does not rise to the top of government because of patronage politics within the ruling party and a system of ethnic preferences that discourages or blocks the country’s minorities, mainly ethnic Chinese and Indians, from government service.

Ethnic Malays, who make up about half of the population, hold nearly all top government positions and receive a host of government preferences because of their status as “sons of the soil.”

Authoritarian laws have helped keep the governing party, the United Malays National Organization, in power — and an ascendant opposition in check.

The day before Flight 370 disappeared, the leader of the opposition, Anwar Ibrahim, was sentenced to five years under a sodomy law that is almost never enforced. Critics called the case an effort to block the opposition’s rise at a time when the governing party’s popularity is waning.

Then on Tuesday, a court convicted Karpal Singh, another opposition politician, of sedition, a law enacted in colonial times.

“We call it persecution, not prosecution,” said Ambiga Sreenevasan, a lawyer and the former head of the Malaysian Bar Council.

The government is accustomed to getting its way, and the crisis surrounding the missing plane is holding officials accountable in ways unfamiliar to them, Ms. Ambiga said.

“Malaysians have come to accept that their leaders don’t answer questions,” she said. “When you are not seriously challenged in any meaningful way, of course you get complacent and comfortable.”

For a relatively prosperous country of 30 million people that is less well known internationally than neighboring countries like Thailand and Singapore, the government’s confused efforts at finding the missing jetliner are an awkward and undesired appearance on the world stage.

The crisis has led to introspection about why the government has appeared uncoordinated and unable to pin down seemingly basic facts about the missing flight.

Officials insisted for three days that baggage was removed from the flight before takeoff when five passengers did not board. But the country’s chief of police on Tuesday said that was false: Everyone who checked in boarded the plane, he said. No explanation was given for the conflicting accounts.

Ibrahim Suffian, the director of the Merdeka Center, an independent polling company, said the response to the crisis had underlined a lack of precision both in government and in the society over all.

“There’s a tolerance for a lack of attentiveness to detail,” he said. “You have a tendency of not asking so much and not expecting so much.”

The crisis also highlighted a lack of competence in government that Mr. Ibrahim said was related to a deference to authority and reluctance to take initiative. “There’s always been a kind of wait-for-instructions-from-the-top attitude,” he said.

Yet amid the criticism of the rescue efforts there was also an acknowledgment that the plane’s disappearance was so unusual that perhaps no government would be fully prepared for it.

“This is almost a unique situation,” said Ramon Navaratnam, a Harvard-trained economist and a former Malaysian senior civil servant. “Anyone would be caught off guard.”

For now, the Malaysian authorities are stuck in the unenviable position of hearing many questions but having few answers.

“They have never faced pressure to perform like this,” said Ms. Lee, the management consultant. “But now international eyes are on them, and they have nowhere to hide.”

Your views are valuable to us, but Sarawak Report kindly requests that comments be deposited in suitable language and do not support racism or violence or we will be forced to withdraw them from the site.